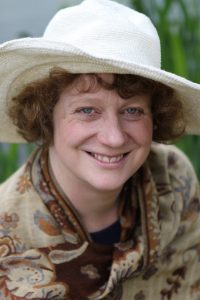 Rachel Stott lives and works in London, UK.  She attended Wells Cathedral School and read music at Churchill College, Cambridge, taking composition classes with Hugh Wood and Robin Holloway. She then pursued postgraduate studies at the Guildhall School of Music and Drama, studying viola with David Takeno and Michaela Comberti, but also managing to infiltrate classes in composition, ethnomusicology, jazz and early music, thus gaining a broader education than was perhaps intended by the establishment.

Rachel has pursued a career as violist and composer, performing with both contemporary and early music ensembles and writing for a diverse range of instruments, including viols, cornetts and sackbuts, lutes, ocarinas, viola d’amore and baryton, as well as the more conventional instruments of the modern orchestra.  She has composed song cycles, string quartets, (No. 1 for the Fitzwilliam Quartet, No. 2 for the Dante Quartet and No.3 for the Callino Quartet), chamber music works, orchestral works and an opera for children, The Cuckoo Tree, based on the book by Joan Aiken.   Her music has been performed at the London South Bank, Wigmore Hall, St John’s Smith Square, festivals across the UK, and in continental Europe, North America and Japan. A record-breaking work, Odysseus in Ogygia, for an ensemble of six violas d’amore, was presented at the 2012 Viola d’amore Congress in Innsbruck, and in the same year Several World, for massed saxophones, was performed at the World Saxophone Congress in St Andrews, Scotland.

Ideas for Rachel’s compositions have come from a wide range of sources: historical, artistic, literary, scientific and medical, including a music theatre piece about the Jewish East End, a vocal and instrumental work which connects the Queen’s accession with the history of the Great Western Railway, and an instrumental piece describing the procedure of Endoscopic Retrograde Cholangio Pancreatography. In 2003 she held a residency as a composer at Blackpool Victoria Hospital, funded by the Performing Right Society Foundation, which led to Gulliver’s Ear for string trio, inspired by watching an operation on the ear.

Rachel is the viola player of the Revolutionary Drawing Room, the Bach Players, the duo Sopriola (soprano and viola d’amore). She also teaches school age children in north London.

Aside from her professional work Rachel enjoys walking, swimming, baking and reading.  She attends an adult education class in Ancient Greek and recently learned how to pluck a goose.